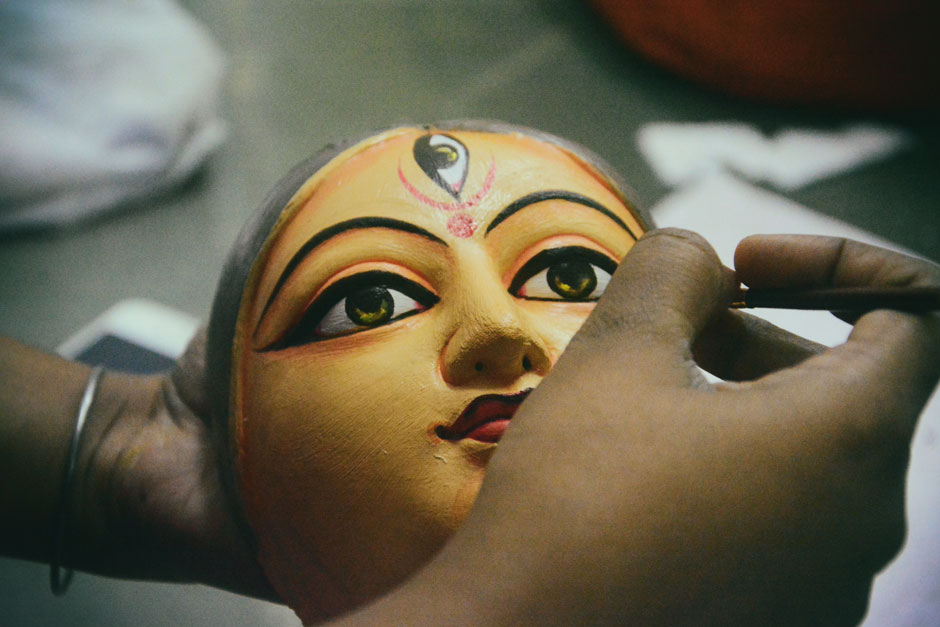 “The highest business of Indian art has always been to describe something of the Self, of the soul, contrary to Western art, which either harps at the superficially beautiful or dwells at the vital-unconscious level.” (Sri Aurobindo. Foundations of Indian Culture p.208)

This is indeed the great difference between Indian art and other art forms. For the Indian artist first visualises in his inner being the truth of the element he wants to express and creates it in his intuitive mind, before externalising it. Stories of how Indian sculptors of ancient times used to meditate for one year before starting on their particular work, are common. Not the idea of the intellect or mental imagination, but the essence, the emotion, the spirit. Thus, for the Indian artist, material forms, colour, line, design, are only physical means of expression, NOT his first preoccupation. So he will not attempt, as in Western art, which in its heydays continuously recreated scenes of Christ’s life or that of saints, to reconstitute some scene of Buddha’s life, but instead, he will endeavor to REVEAL the calm of Nirvana. And every accessory is an aid, a MEANS to do so. “for here spirit carries the form, while in western art, form carries whatever they think is spirit”.(Foundations p.211)
In effect, Indian art, its architecture for instance, demands an inner eye to be appreciated, otherwise its truth will not reveal itself. Great temples in India are an architectural expression of an ancient spiritual culture. Its many varied forms express the manifestation of the infinite multiplicity which fills the oneness of India. And indeed even the Moslem architecture was taken up by India’s creative genius and transformed into something completely Indian.

Indian sculpture also springs from spiritual insight and it is unique by its total absence of ego. Very few of India’s sculptures masterpieces are signed for instance; they are rather the work of a collective genius whose signature could be “INDIA”. “Most ancient sculptures of India embody in visible form what the Upanishads threw out into inspired thought and the Mahabaratha and the Ramayana portrayed by the word in life”, observes Sri Aurobindo (Foundations, p.230). The Gods of Indian sculpture are cosmic beings, embodiments of some great spiritual power. And every movement, hands, eyes, posture, conveys an INNER meaning, as in the Natarajas for example. Sri Aurobindo admired particularly the Kalasanhara Shiva, about which he said: « it is supreme, not only by the majesty, power, calmly forceful controlled dignity and kinship of existence which the whole spirit and pose visibly incarnates…but much more by the concentrated divine passion of the spiritual overcoming of time and existence which the artist has succeeded in putting into eye and brow and mouth… (Foundations P.233)

Indian painting, has unfortunately been largely erased by time, as in the case of the Ajanta caves. It even went through an eclipse and was revived by the Mughal influence. But what remains of Indian paintings show the immensity of the work and the genius of it. The paintings that have mostly survived from ancient times are those of the Buddhist artists; but painting in India was certainly pre-Buddhist. Indeed in ancient India, there were six “limbs”, six essential elements “sadanga” to a great painting: The first is “rupabheda”, distinction of forms; the second is “pramana”, arrangement of lines; the third is “bhava”, emotion of aesthetic feelings; the fourth is “lavanya”, seeking for beauty; the fifth is “sadrsya”, truth of the form; and the sixth is varnikashanga”, harmony of colours. Western art always flouts the first principle “rupabheda”, the universal law of the right distinction of forms, for it constantly strays into intellectual or fantasy extravagances which belong to the intermediate world of sheer fantasia. On the other hand in the Indian paintings. Sri Aurobindo remarks that : “the Indian artist sets out from the other end of the scale of values of experience which connect life and the spirit. The whole creative force here comes from a spiritual and psychic vision, the emphasis of the physical is secondary and always deliberately limited so as to give an overwhelmingly spiritual and psychic impression and everything is suppressed which does not serve this purpose”. (Foundations, p.246).

It is unfortunate that today most Indian painting imitates Western modern art, bare for a few exceptions. And it is hoped that Indian painters will soon come back to the essential, which is the vision of the inner eye, the transcription, not of the religious, but of the spiritual and the occult.
(To be continued)